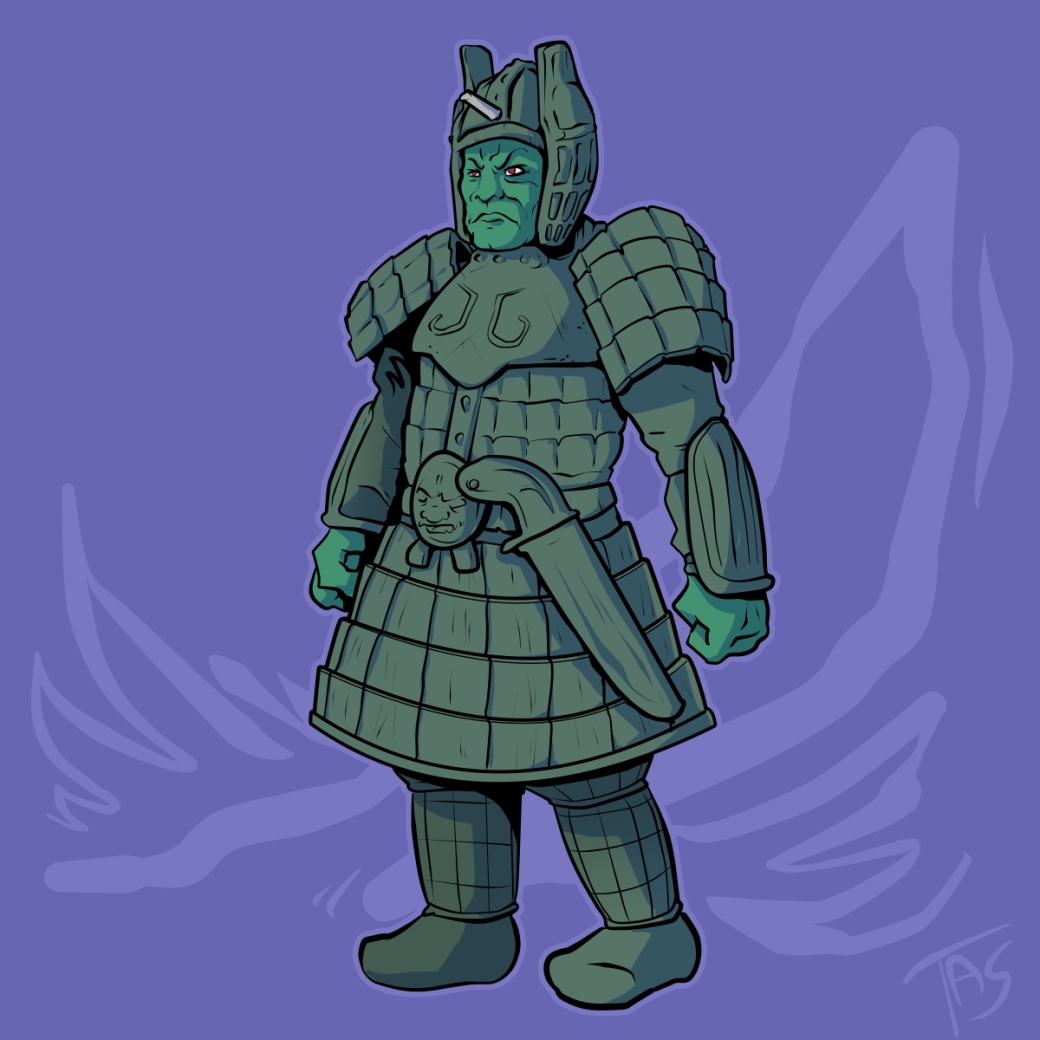 Literally “Giant Demon God”, Daimajin is a massive stone statue inhabited by the spirit of a vanquished demon king, Arakatsuma, who has been kept dormant by the prayers of the inhabitants of a nearby village, his struggles against his imprisonment manifesting as occasional earthquakes. When compelled by the villagers or the statue is put under physical assault, the spirit can animate the statue and wreak havoc throughout the region, often destroying the forces of some evil warlord but also proving to not be particularly discriminate about what or who gets trampled once awakened, although it seems to show some leniency towards children or the pure of heart. After his purpose has been served, the statue will return to normal there are instances of Arakatsuma turning into a hitodama-like ball of fire before flying away, but he seems to remain bound to the statue. Despite being a carved idol, Daimajin is shown to capable of bleeding even in its dormant stage and some promotional material shows it possessing a strange array of organs and nerves.

A shape-shifting female water spirit, the chesma iyesi will primarily appear as a cat but may take on numerous forms resembling other animals, fairy- and mermaids-like creatures or often simply an attractive human woman, their identity given away by the hems of their clothes being wet. Each chesma iyesi inhabits a particular well, fountain or spring. They are commonly considered dangerous, using their forms to entice young people into the water and drown them, however the kuyu iyesi is a more benevolent guardians of their wells, the water from which is believed to have curative or luck-granting properties.

Animated corpses, the draugr were spirits of the unquiet dead, remaining bound to their corporeal form for reasons such as vengeance or greed, the latter often leading to them being associated with guarding gold and treasure inside their burial mound. Draugr were thought to possess a number of magical abilities, including changing their size at will  and being able to turn into mist or animals and were known for attacking people or livestock, although even just being in their presence could lead to madness, disease or death. Methods to prevent the dead from rising including binding their feet or piercing them with needles to stop them from walking, a pair of iron scissors or other iron implements left on the corpse and a special door through which the body was placed in the crypt thought to confuse or disorient the spirit and prevent it from finding its way back out again.

A fish-headed, snake-bodied river god of the Tonga people believed to live in the Kariba Gorge in the Zambezi valley, protected by whirlpools and functioning as a protector and a god of the underworld. In more modern times, Nyami Nyami’s presence was made known when outside contractors began construction of the Kariba dam in the late 1940s and 50s which required the relocation of the local Tonga. They acquiesced, believing Nyami Nyami would come to their aid and sure enough misfortune beset the project, construction stymied by years of previously-unseen levels of storms and flooding assailing the region. The dam was eventually completed in 1960, but greatly delayed and costing as many as eighty laborers their lives before it was done. It was believed the dam separated Nyami Nyami from his wife, and to this day, the relocated Tonga believe tremors in earth felt in the region are the great serpent trying to finally break the wall and reunite himself with his loved one.

Brujos, warlocks of Chilote folklore, will employ the invunche or imbunche as a pet and watchdog of sorts, using it to guard their caves’ entrances as well as employ them on menial tasks or acts of vengeance. The invunche is created by taking an infant of a certain age, no more than a year old, and twisting its body, starting by bending its right leg back up to its neck and reshaping it as an increasingly deformed figure. It is then fed the milk of a black cat until it is old enough feed on human flesh of the recently dead acquired from cemeteries. Unless allowed to travel outside by its brujo, the invunche is bound to its cave and it cannot leave, even to feed itself. In folk medicine, it was said the fat of an invunche could be used to prepare ointments used for pain relief and the treatment of rheumatism, or very effective skin care products. 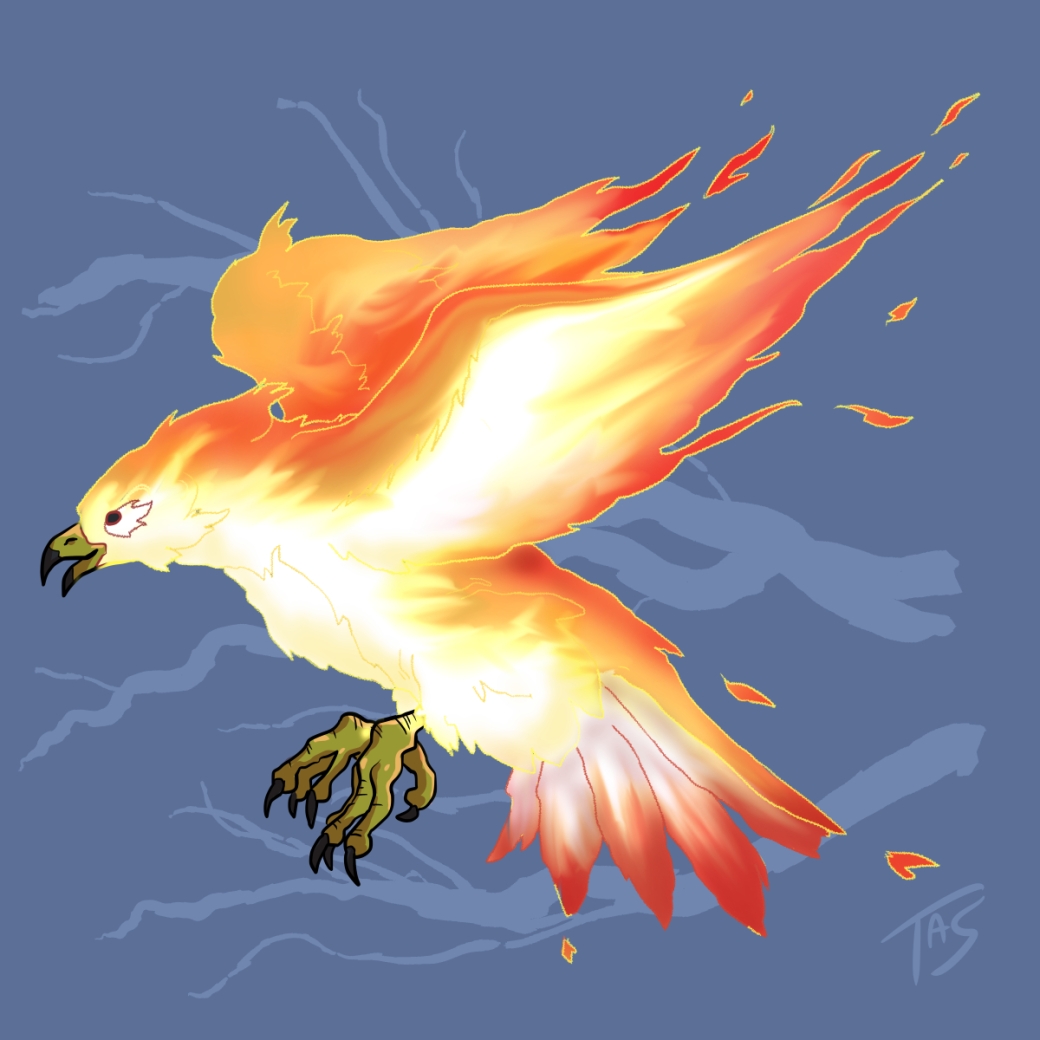 A fiery demon or spirit, the raróg often took the form of a flaming hawk or falcon but could also appear as a dwarven creature or a whirlwind. They were believed to live at the crown of the Slavic world tree, guarding the entrance to Vyraj, a warm, vibrant paradise that was also where migratory birds went to to escape the cold winters. They are thought to share some connection to the firebird of later Russian fairy tales, a peacock-like bird with golden feathers that continued to glow brightly even after being removed.

Usually regarded as malevolent spirits, the fuath (“hate”) is a class of nocturnal fair folk who inhabit various bodies waters and while not universally aggressive they have earned their reputation by being fearsome guardians of their aquatic homes and the creatures that live there. Similar to the kelpie, fuathan are spectral figures and often capable of taking on multiple forms but in their standard human-like form they are identifiable by yellow hair/fur or manes, tails and webbed hands and feet. Some fuathan are said to intermarry with humans and the resulting offspring may possess some these physical traits. The glaistig is one type of creature belonging to the greater umbrella of fuathan.