Region of origin: Northern US forests

An ape-like fearsome critter that makes use of hollowed-out trees as both its home and its ammunition, the argopelter uses its whip-like arms to hurl large branches and pieces of the trees with lethal force down at the heads of loggers and lumberjacks who it feels are invading its territory. The argopelters are largely solitary creatures, due in part to scarcity of the owls and woodpeckers that are their food source keeping them spread out, and also a low reproduction rate as their pups are only born on the 29th of February.

Fast, stealthy, and agile, the Hide-behind earns its name from its ability to obscure itself behind even narrow trees and other brush as it stalks its prey, often lumberjacks working near its territory. Once it is upon them, it will let out a fearsome noise and knock them unconscious before dragging its victim back to its lair where it will feast on them, favoring their intestines. It is described as a mix between a grizzly bear and a French sheepdog, six feet tall and bipedal despite the fact that it has never actually been seen. They’re said to detest the smell of alcohol, and being extremely drunk is the best method to ward one off. Noises in the forest at night, such as breaking branches or an owl that has gotten a maraca, may be attributed to the Hide-behind.

With reports dating back to the late 1800s, the santer is a large cat rumored to live in the woods and rural areas near North Carolina. Most of the encounters with the santer involved it attacking or killing pets and livestock and was particularly blamed for a number of dead or missing cats in the 1890s. Known for its speed and its ferocity, it was supposedly able to swing its clubbed tail with enough power and speed to kill cattle and singe the hair or fur off where it struck. 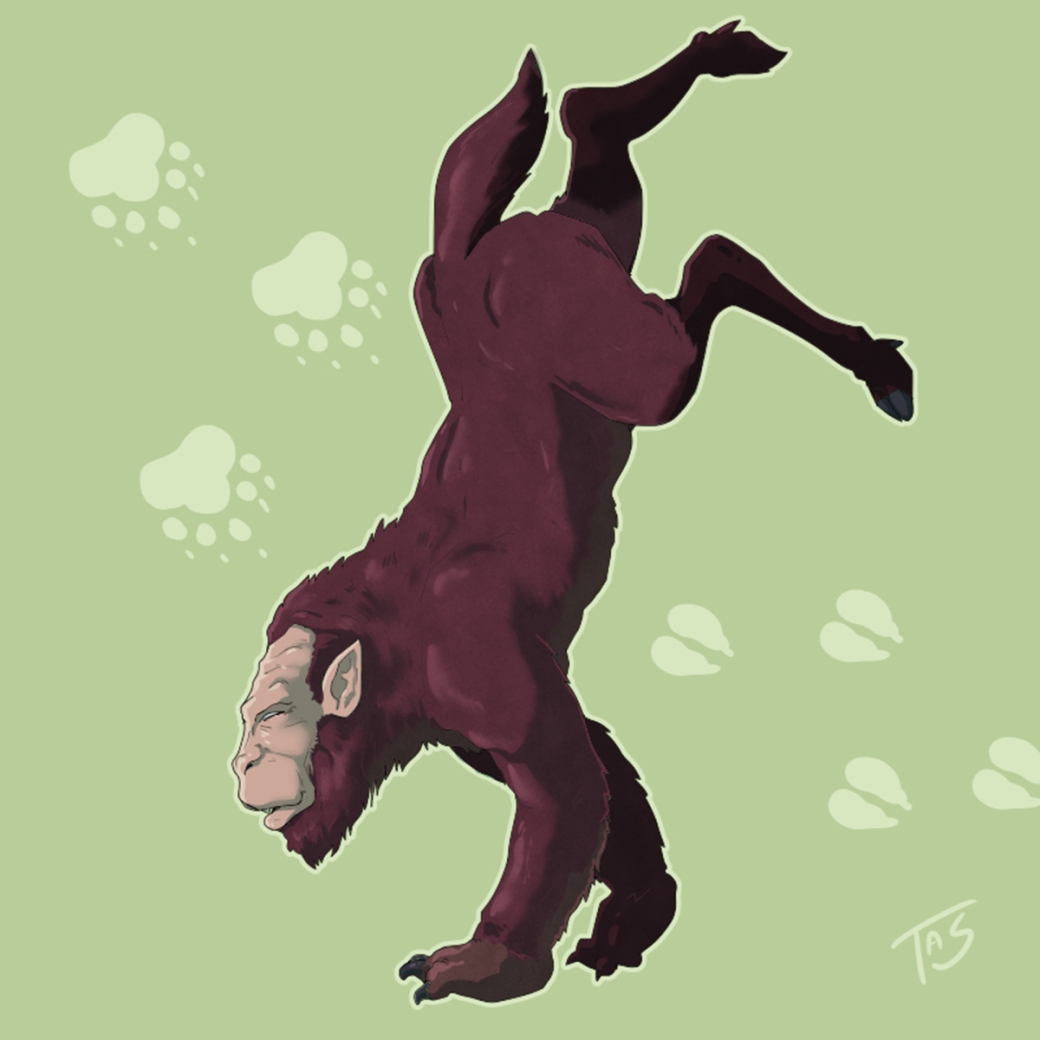 A satyr-like trickster who lived near the lumber camps around the border of Maine and Canada, the Shagamaw was a figure with forepaws of a bear and hind legs of a moose. He would alternate walking on the two different sets of legs to leave changing tracks to confuse hunters or loggers in nearby camps. The tracks usually continued “for twenty chains,” equal to 440 paces or a quarter mile, before the Shagamaw switched off to the other feet. It was believed he maintained this regular distance because the creature tended to mimic things; similar to how he took on aspects of bears and moose he was copying surveyors he had observed working in quarter-mile increments on the logging camps’ tote-roads that now ran through his territory. Conversely, some said it was because four hundred and forty was as high as he could count. 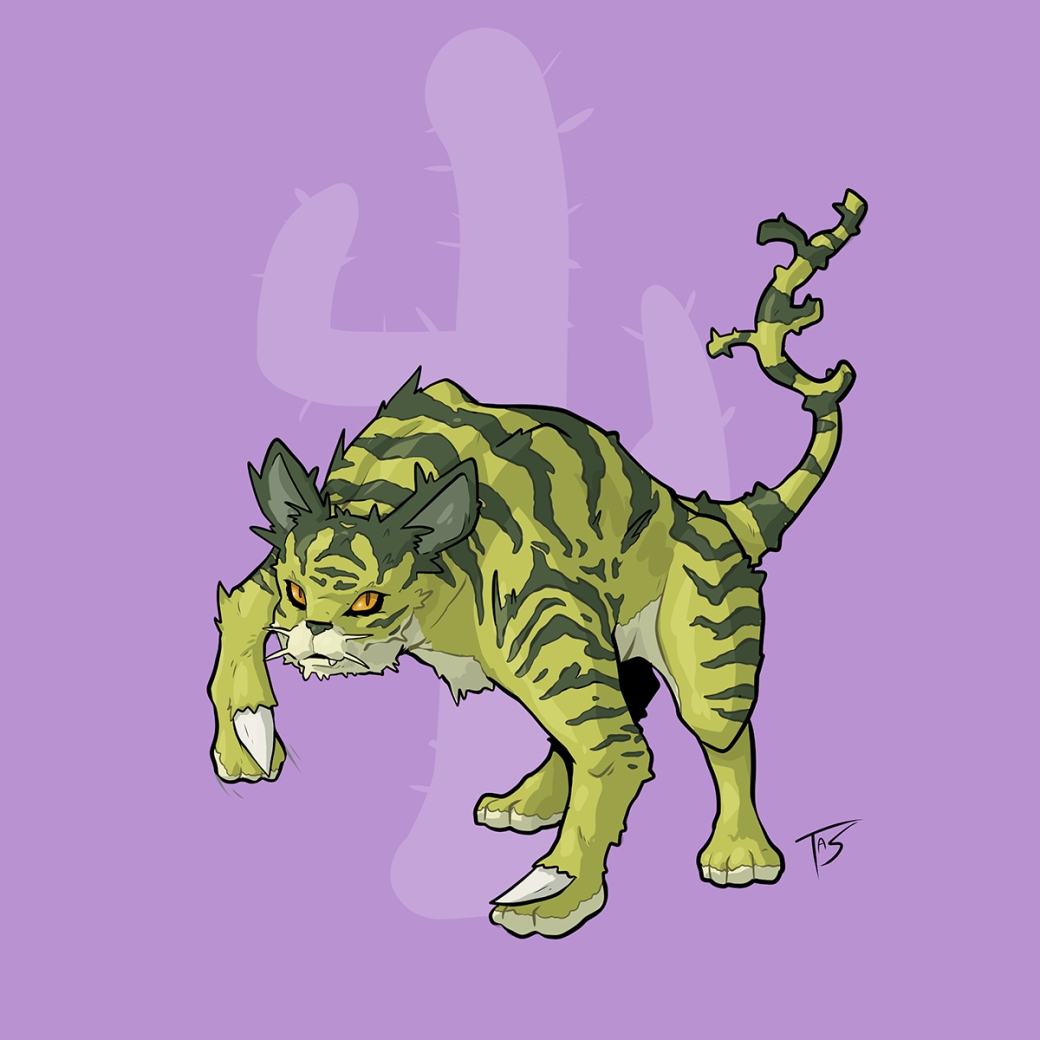 A nocturnal creature occupying the plains and brushlands of Nevada and Arizona down into northern Mexico, the cactus cat has a thick, thorny pelt and branching tail, but primarily earns its name from its diet, the sap of the cholla cactus. The cactus cat will wander in search of cholla, and then slice open its trunk using bony protrusions over its forepaws. The cats will make a circuit of their territory, marking the cholla this way until they comes back to the starting point, where the sap will have fermented into a mezcal. The cats will then consume this, becoming very inebriated and may be seen yowling and scrapping with one another in the desert night.

Originally posted on Tumblr on November 3, 2016

A dragon-like creature first spoken of by German settlers in pre-Revolutionary War America, tales of sightings or attacks of the snallygaster traveled up and down the east coast for several hundred years, with newspaper reports of the animal persisting into the later 20th century and purportedly even catching the eye of Teddy Roosevelt, who wanted to attempt to hunt it down. The snallygaster would take to skies on its massive wings, terrorizing the communities it flew over, before swooping down, screeching like a train whistle and picking up people, pets or livestock in its metallic claws to carry them off and feed. In some versions it would pierce its victims’ bodies with its sharp beak and drain them of their blood. Supposedly the beast would be warded away from buildings with a seven-pointed star painted on its side.

Originally posted on Tumblr on September 15, 2016

A small animal that can wrap itself around a tree trunk and make itself effectively invisible by blending in with the bark, the treesqueak will hide in plain sight and imitate a variety of noises, from other animals such as panthers or hogs to machinery and gunshots, to disorientate potential predators or simply mess with people in its woods. They generally exhibit nice and playful dispositions but can turn aggressive.